How mainstream fitness left me burned out, beat up, and exhausted but working out less and ditching OCD dieting got me in the best shape of my life.

Let me tell you a quick story about a previous version of the guy penning the words you’re reading right now:

A 28-year old guy who preaches the benefits of clanking iron, running till your lungs burn, and taking a firm stance on I’ll pass on the meal you’ve prepared and stick with the protein shake and baggy of carrots I brought with me, thankyouverymuch.

He knows that “hard work produces results” — in the gym, and in the kitchen.

He hits the weights hard, 4-5 times per week. He tracks his calories, punching in the amount of protein, carbs, and fats in each of his meals — down to the gram — into the myfitnesspal app on his phone.

He spends his spare time reading about advanced training techniques, and posting back-and-forth on forums about how to squeeze another quarter inch of growth in this or that muscle group, or how to tweak his “macros” to push through a plateau and get down to 8% bodyfat.

He’s got a wife and two young kids at home, too. He hasn’t slept through the night in 2+ years, but he knows that “pain” he feels when trying to push through a tough workout — and the notion that he should maybe scale back — is a sign of weakness.

Weakness that can be eliminated if he can just push. A little. Harder.

So he does. And here’s what happens: Eric is burned out, beat up, and exhausted.

The workouts that worked a few years ago are no longer working.

He cuts calories, “cleans up his diet”, pushes harder in the gym — even tacks on a few extra sets for good measure.

But he just keeps getting more tired. Instead of seeing his lifts increase, they’re moving the opposite direction.

Okay, third-person narrative aside, this is a true story. I’m Eric. This is my story.

At least – it was my story.

Now things are slightly different. Namely, I work out less and ditched the OCD dieting lifestyle.

I can’t remember the last time I did a barbell bench press, squat or deadlift. I eat ice cream most days, and have a strict “I’ll take seconds, please” policy when my Mom invites us over for Thanksgiving Dinner.

I know what you’re thinking: So you embraced the reality of the “dadbod”, gained 30 pounds, and accepted it’s just not possible to be a busy dad and be in great shape, right?

Yep — that’s me. Often working 50-60 hours per week, rarely describing last night’s sleep as “awesome or uninterrupted”, and doing everything I can to be a kickass husband and father.

I only spend around 3 hours per week working out. And I definitely don’t do the whole “dieting” thing.

Now, most people would tell you that’s impossible…

Must have great genetics — not really.

Must be all OCD about eating — nope.

Probably has the extra time and energy to work out as much as he wants — Definitely not (as I outlined above).

Here’s my story of seemingly healthy — but actually burned out, beat up, and exhausted — to becoming actually healthy and finding the balance I needed to be in great shape without abandoning my family or losing my mind.

A Coin With Two Sides…

I’ve come at this whole health and fitness thing from two different perspectives:

Pretty much anyone can succeed if their stage of life is similar to #1. But #2 presents some different challenges, as I realized just a few short years ago.

Suddenly fitness, something that used to come easy for me, was really hard. My priorities and responsibilities had shifted dramatically. I was in a new “stage” of life.

Still, I was used to pushing hard in the gym and allowing my health and fitness regimen to take up a big portion of my time and energy, even though it was becoming increasingly difficult to balance everything.

The rational side of me was like, “Dude you need to cut back. You’re a father now. You’re not sleeping, you’re stressed out from worrying about keeping your kids alive and providing for your family. Things have changed.”

But armed with the “all or nothing” mindset toward health and fitness, I figured it was just a matter of manning up and pushing through.

And to be honest, a lot of my self-worth, and my identity, had become tied up in how much weight I could bench press and how “dedicated” I was to the fitness lifestyle.

There was a part of me that felt like, the harder things were — the more I had to “suffer” — the better. That way it felt more elite. And if I couldn’t work out and eat with this all-out intensity; what’s the point in doing anything at all?

(Sound familiar? This is the “all or nothing” mindset most people approach health and fitness with. They think, “getting in shape” means aggressive, strict dieting and working out as hard and often as possible — and anything less is a waste of time).

So for the better part of 2-3 years I struggled to find balance.

Slowly, I saw my passion and enjoyment that I used to find through fitness dwindle. I started dreading workouts instead of looking forward to them.

Instead of getting stronger, I was getting weaker (despite trying to push harder).

Instead of feeling more energized at the end of workouts, I was completely and utterly exhausted.

Ultimately, instead of my health and fitness making be better, it was making me worse.

I was at a point where in the past year I had taken months off from doing anything in the gym and working out had become something I “should do”, not something I wanted to do.

Looking back now, this is one of the best things that has ever happened. Confused? Let me explain…

The Changes I Made

No way around it, I changed my entire view of health and fitness (more on this in a minute). But, to provide some specifics:

Let’s talk more about that last one…

If you look at the health and fitness industry as a whole, the picture is pretty grim.

The typical pain and suffering model of health and fitness aims to get you stuck in the “not good enough” striving mode. It’s a system that is superbly skilled at keeping you chasing your tail that you will never catch.

BUY IT or you’ll always be fat, weak, and worthless as a man (and then check back in a month cause I’ll have something new for you, hot off the press).

I hate to admit it, but this is how I approached fitness for a good part of my adult life.

That’s why about a year ago I decided to break free and re-define what health and fitness means to me and what I settled on was this concept of “triple threat strength.”

In the face of an industry begging you to try and be “good enough”, I challenge you to fight back and, instead, use health and fitness as a catalyst to be the best YOU that you can be.

My goal for MTM is that it becomes a place where you can learn how get in better shape, but it’s a lot more than that, too.

At the core, MTM is an initiative — a mission — to motivate and inspire men with families to stop defaulting to the status quo and start living a life that matters. Regardless of where you’re at in life right now, I believe you have what it takes to build a body you’re proud of and become the leader your family needs.

Fact: Looking better, feeling better, having more capacity is going to make you better in every area of life.

It will make you a better husband, a better father, a better man.

Instead of letting fitness become an endless pursuit of adequacy — a battle we’ll never win —  I think it’s time we start using that to live with strength, health, and confidence and cultivate a legacy we’re proud of. 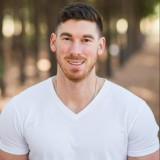